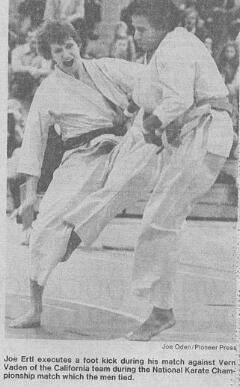 With one spinning, explosive kick, Walter Bera brought the roof down at the Minneapolis Community College gymnasium Sunday afternoon.

It was delivered suddenly and unexpectedly and the crowd rewarded Bera for this rare treat with a generous roar of approval.

His teammates responded with ear-to-ear grins and warm handshakes. His maneuver had electrified the crowd, but it put him and his Minnesota teammates a leg up on the California team they were competing against for the national state team Kumite championship at the National Karate Tournament. The tournament included competition in kumite (fighting) and Kata (form). As it turned out, this kick gave the Minnesota trio comprising of Bera, Joel Ertl of St Paul and Joe Mayrand of Duluth the title. It was worth 1/2 point, the difference in the match.

There is no contact in this type of karate competition. The competitors pull their punches and their kicks. But Bera theorized that, in a contact situation, the kick would have left his opponent, Avi Rokah, with a couple of broken ribs.

Bera’s kick gave his team a 1/2 point lead in the first of three matches. It was then up to Mayrand and Ertl to protect that lead in their bouts. Mayrand drew with Toru Kellam, as did Ertl in the final match against Vern Vaden, who has won several national titles and competes internationally.

“Mayrand did a great job against a very good counter-puncher,” Bera said, “and Ertl was tremendous against Verden. He gave him no target at all.”

“I couldn’t let him score on me,” Ertl explained. “Walter gave us that 1/2 point and we would have been down the drain without it. But if Vaden scored on me (and tied the match) he and I would have had to fight again. He can be extremely tough when it’s on the line like that.”

“I guess we were a little surprised to win it (the team title),” Ertl said. “Technique-wise, we’re as good as anyone here. But we don’t have the experience.”