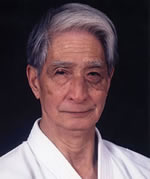 Sensei Nishiyama’s daughter, Ms. Nami Nishiyama, received the award on behalf of her father. When presenting it, Jorgensen said, “Your father always said he never wanted to achieve the level of 10th Dan because he believed to do so and acquire the highest rank meant that his learning and his life would be over. Thus, he would never accept the rank while he lived. He believed there was always more to learn and more to improve and he lived his life in search of that growth and development. It is my honour to present this on behalf of the ITKF Technical Committee and all of his students.”

Ms. Nishiyama said, “I believe that my father is still among us, in the air that gives us life and the earth that supports us. His spirit will continue to live through his students around the world as they continue to study and grow.”

The presentation took place on October 10 – the birth date of the late Sensei Hidetaka Nishiyama. The ceremony was on the occasion of the grand opening of the Budo and Japanese Sports Center in Stara Wies, Poland and the ITKF V World Cup.

He passed away in November, 2008 at the age of 80 years. “It is fitting that the ceremony takes place on the anniversary of his birth as we remember Sensei Nishiyama as our instructor and recognize that his work continues.” Jorgensen said.