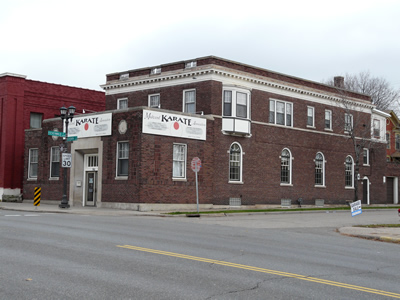 It is an old building, but erected to last beyond the length of the mortgage, and in the past it has served more than its current function.

At one time, the place was a stopover for people on the way to the cemetery, and during the infrequent historical tours he conducts, Joel Ertl will point out a mortuary light here and there.

When the lights go on these days, though, there is nothing funereal about the activity within. The place is filled with active, lively bodies, with men and women and children working on their kata or kumite en route to a green, brown or black belt. It has been this way since the sign went up in 1975.

In 1979, Ertl took over as instructor at the school on East Seventh Street, having served his apprenticeship in St.Cloud. He moved into the apartment above the studio. It now is the place he and his wife, Anita Bendickson, call home.

The husband-wife team spends its days and many evenings teaching Shotokan, the Japanese karate style, or JKA as it is more popularly known. But with home so close to office, they have discovered even when they leave the job behind, it is never far away.

Ertl, from Watkins, was introduced to karate when he was 15. “My brother was going to St.Cloud State and he brought home a school newspaper with a karate advertisement in it.” he said.

“I used to hitch-hike the 30 miles to St.Cloud to train. Sometimes I’d catch a ride with someone I knew, but for the most part I’d thumb my way. It’d generally take take me an hour to get there, but sometimes two. There was a lot of just standing around on the highway.”

Ertl became a dedicated disciple of Shotokan. “I wrestled when I first started high school” he said “but I gave it up, that and everything else after I got into karate.”

By age 17 he was a black belt, a year later an instructor in St.Cloud. He was a second- degree black belt by age 19, and at 22 had moved up another step.

“I saw him when he first tested as a beginner,” said Robert Fusaro, who founded the Midwest Karate Association in 1961. “He was always very serious-minded about karate. He took it very seriously. He was dedicated to the point that he started to shine.”

It was something other than a newspaper ad that drew Bendickson to karate while studying philosophy at the University of Minnesota. She was assaulted, and decided to learn something about self-defense. “I was a passive person before,” said said. “Karate turned that around.”

Karate as Bendickson and Ertl practice it, is somewhat different from what has been popularized in Bruce Lee and Chuck Norris films. Shotokan emphasizes control of the body, its muscles and the mind. It is a physical and a mental discipline.

Neither Ertl nor Bendickson has had to use its physical aspects in self-defense.   “The knowledge I’ve gained has helped me avoid some situations that might have become physical,” Ertl said. “In karate, you learn about distances between you and another person. Sometimes, just maintaining your distance in a bad situation can keep it from becoming worse.”  Bendickson says it might have made a difference when she was assaulted. “I would have reacted differently,” she said. “Karate teaches you to recognize and react to your gut feelings. They’re seldom wrong, but women aren’t real good at asserting those feelings. I probably could have avoided the avoided the assault if I knew what I know now.”

For Bendickson and Ertl, karate is not so much a form of aggression as it is an exercise in self-awareness and self-preservation. It has little to do with destroying but a lot to do with living.

Try getting that message across in a funeral home.