The following text is a series of excerpts taken from the DVD “Essential Basics, Volume Three”. In the DVD, this text is presented along with a series of live actions shots and still shots. 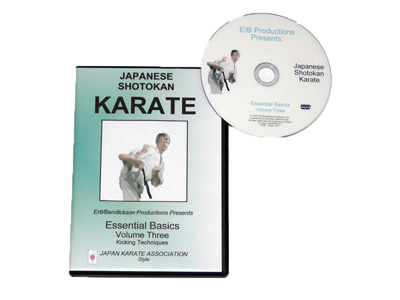 Kicking techniques can be very powerful. Momentum- necessary to create force- is especially easy with kicking techniques because of the size and strength of the legs and the direct connection between the legs and the hips. To convert momentum to force an abrupt change in speed at the end of a technique is necessary. It is also important to deliver the force of the blow to the smallest possible striking area. This concentrates the impact on a single point, and delivers the impact in the shortest possible period of time.

Kicking techniques can be divided into two main categories- thrust kicks and snap kicks. A thrust kick utilizes the same principles of focusing as an arm technique such as a punch. A thrust kick brings the leg to an immediate stop on impact with the target, locking the kicking knee into position, so there is no give on impact. A snap kick uses a striking action that recoils as soon as contact is made. This minimizes contact time so the shock of the blow cannot be reabsorbed into the body. With either focusing or snapping actions the proper use of the muscles and control over the supporting leg and hips to maintain balance is necessary to create techniques with maximum force.

In most self-defense situations it is better to try and keep kicking techniques simple and direct. In shotokan, the karate-ka learns to make each type of kick, for example the front kick, adaptable to many different situations. By using proper judgement of distance and timing a basic kick can be adapted to be very effective in a wide variety of situations. By developing a high degree of proficiency with the basic kicks the karate-ka can avoid unnecessarily complicated maneuvers. This allows the karata-ka to be more versatile in the unpredictable situations and environments encountered in self -defense.

Snap kicks are very practical kicks for karate-ka of any level. For all kicks, the powerful muscles of the legs, their greater mass and the long distance traveled by the leg during a kicking action allow a kick to develop a large amount of momentum. Snap kicks then utilize a sharp recoil to reverse the direction of the strike just at the moment of impact. Because of the short contact time of the foot during the strike the force of impact is not reabsorbed into the body. This delivers the maximum impact force to the target without destroying the karate-ka’s balance.

When delivering any kick, the karate-ka is vulnerable because kicks are delivered while standing on one leg. This is especially true when kicking for higher targets which are within the opponent’s arms reach. Snap kicks overcome this to some degree because the recoil retracts the kicking foot before an opponent has a chance to grab the leg. The recoil also allows the karate-ka to draw the body together quickly and then use the drive from the supporting leg to deliver a powerful follow-through technique after the kick.

This section of the video is concentrates on the front snap kick, side snap kick and roundhouse kick. The mechanics used in these kicks are explained in detail. More importantly, the principles behind these actions are be presented in a manner which can be used in snap kicks of all types.

As in all karate techniques proper control over balance, correct synchronization of muscle groups and proper direction of force is necessary to create powerful kicks. Like the snap kick, thrust kicks create momentum by putting the body weight into motion. However, unlike snap kicks which use a very short contact time upon impact, thrust kicks lock the body and kicking leg into position to redirect the counter-shock of the blow to the floor.

Because of the longer contact time with the kicking foot and the vulnerable position of the person delivering a thrust kick, the most practical targets for thrust kicks are low. However to develop muscle strength and flexibility, as well as coordination and balance thrust kicks are typically practiced while kicking for higher targets. Also, because of the high risk of knee injury to training partners, thrust kicks usually are aimed above the belt during kumite practice.