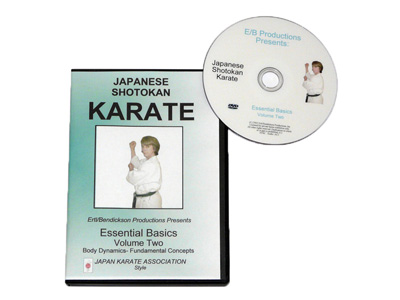 The following text is a series of excerpts taken from the DVD “Essential Basics, Volume Two”. In the DVD, this text is presented along with a series of live actions shots and still shots.

Shifting is the movement of the entire body from one point to another in a straight line. Shifting includes both stepping and sliding the feet. Shifting body weight by stepping into the technique is the method which allows the karate-ka to develop the greatest amount of force. This is possible bec ause these techniques utilize the maximum amount of body mass by using the legs driving against the floor to push forward against the hips. This allows one to move the body weight at a very fast speed. The major disadvantage of stepping to shift the body is that it takes a relatively long time to get the technique up to full speed and takes a lot of room to develop that speed.

Sliding is also a very powerful method for shifting the body weight. Sliding also uses the drive with the legs against the floor to propel the hips forward but it is generally used at a little closer range than stepping. Because a shorter distance is used sliding avoids to a certain extent the some of the disadvantages of stepping actions. In the video, we follow by examining a series of sample techniques which utilize body shifting to develop force and power.

Rotation is developed by the circular motion of the body mass. Control of rotation is centered on the use of the hips. Through the use of hip rotation it is possible to create very powerful techniques in a small space. The force generated by hip rotation is nearly as powerful as that developed by shifting the body weight. Hip rotation is most effective at close range, usually about an arms length away from an opponent. Because of this one of the most common uses of hip rotation is with blocking and counter-attacking combinations. Hip rotation can be used from almost any stance but is most commonly used in the front stance, back stance and the side stance. When the end position of the hips is over-rotated in relation to the front leg it is said to have a “reverse hip rotation”. Hip rotation can be used in the same direction as the force of the technique or the hips can be rotated in the opposite direction from the arm action. The video continues by taking a closer look at several techniques which use hip rotation in different ways to create force for the technique. In all of these actions the same basic principles of rotation are in play. Understanding these principles will help you use hip rotation more effectively.

Hip vibration consists of a short sharp back and forth action of the hips while in a stationary position. This type of body action is generally used for in-close situations where the physical movement of the body weight is restricted and the use of a larger body action such as shifting or rotation is not practical. Hip vibration develops the least amount of momentum of the five body actions presented here but it develops that momenetum in the shortest period of time. While Hip vibration does not provide a lot of body mass to the technique it does create a very strong shock at the initation and it allows one to use maximum potential force in situations with very limited manuverablity.

The remaining two types of body actions which we will look at before we go on to focusing and muscle action are lifting and dropping the body weight. With either lifting or dropping it is relatively easy to put your entire body weight into a technique. Because of this lifting and dropping actions are very powerful, however, in order to make practical use of either of these body actions the opponent must be very close. In the case of lifting actions the target must be at a higher point from the start of the technique making lifting an ideal way for a shorter person to defend against a taller person in close situations. Dropping the body weight can be useful for a taller person defending against a shorter person when close but it is especially useful when used for a follow through technique after your opponent has been knocked down. Now the video