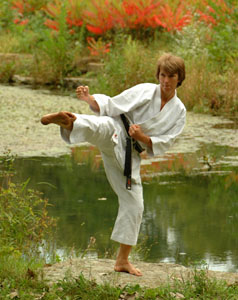 Anita Bendickson is 120 pounds of tough.

Last Friday and Saturday, her toughness got the official seal of approval, so to speak. She won the women’s division in the International Amateur Karate Federation’s national tournament, held at Hennipen Community College in Minneapolis Friday Night, in an event not directly related to the national tournament, she fought a tall, rangy woman from Detroit. Though no formal judgement was rendered, Bendickson was better.

In karate fighting- Bendickson’s style- called Shotokan, there is no deliberate contact. The fighter throws a full punch but focuses the punch just short of the target. If a Shotokan karate fighter tries to hit someone in the solar plexus, for example, the punch should focus perhaps one-half to one -quarter inch from the opponent’s chest. It’s not a pulled punch; it’s a full-power, full- extension punch that stops just short of the target.

In the complicated heat of a karate fight, however, some punches inevitably go too far. In Shotokan karate, women may wear knuckle pads when fighting, but in the Friday night fight, they were not. At one point, the bare-handed woman from Detroit reached out and hit Bendickson in the mouth, and Bend ickson’s head snapped back so sharply I feared for her neck.

I said “whoops”, and the guy next to me said something less printable, and we waited to see if she would topple over. She didn’t, and the fight went on.

Afterwards, I went down to look at her lip, and it was a classic. Even if Bendickson hadn’t done so well in the fighting, she could have won the North American Fat Lip Championship.

Monday morning, I stopped at Midwest Karate’s St Paul dojo to talk to her. And I asked, when somebody reaches out and hits you in the face, in what is supposedly a non-contact sport, do you get mad?

“No, I don’t think so. It hypes me up. But you don’t really get angry.” said Bendickson, whose spectacular lip had flattened to near-normal size. “You’re going to get hit sometimes, that’s the way it is. Sometimes you don’t even feel it.”

On Saturday, she fought her way through the preliminaries, and into the finals. Her most physical fight in the finals was the second-to-last, with a large, quick woman from Los Angeles. Bendickson scored a half-point, and was leading when the other woman hit her in the middle of the forehead.

Again, I thought she would go down, but she stayed on her feet.

The referee broke up the swirling fight as soon as there was contact, and brought the tow women back to a neutral, starting position.

Bendickson looked like she was ready to continue, when on the judges, fourth degree black belt Jerry Marr of Canada, walked onto the mat and put his arm around Bendickson and seemed to prop her up.

“I wasn’t even sure I was facing the right direction.” she said Monday. The excessive contact gave her the additional half-point she needed for victory.

In the final, Bendickson beat Diane Ehrman, a very small and very tough woman from Minneapolis.

With that victory, Bendickson, an instructor at Midwest Karate Association and the University of Minnesota, was the champ.

“I was surprised to win it” she said. “I was third last year, so I figured I had a good shot to get into the finals. But the competition is getting better. It was good this year, better than last year.”

“Were you happy when you came off, or were you mostly thinking about your forehead?” I asked.

“Oh, no, I was happy. You always get a little dinged up,” she said.

Another interesting aspect of the fights is the feeling of camaraderie among the fighters. Most of the best ones know each other, and there is a feeling of trust among them. You don’t go out on the floor expecting to get hurt, because the other fighter really doesn’t want to hurt you. Punching som ebody is not only a matter of bad technique, it’s bad form in the British sense.

In any case, Bendickson has a fat lip, a sore forehead, bruised legs, miscellaneous dings on her body and arms. And, to be sure, a large medal on a red, white and blue ribbon.

She’s good. She really is.